Why Do Ants Come In The House 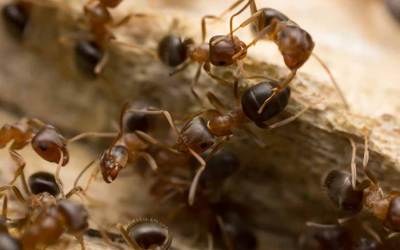 When ants come into the house, they are looking for two things – food and shelter. Ants may come in the house because:

2. Juice and soda containers were thrown in the bin without rinsing.

3. Your counters haven’t been wiped in a while and are covered in sticky spots and various scents

4. There is a valve leak or water build-up on your property

5. It’s seasonal – ants come into the house in the summer because they need to work harder to collect food for the winter. Hotter and drier weather means more ants in the house.

Ants are omnipresent—they are literally everywhere. Your home can easily be infested by ants if there are hives nearby. Your garden, rotten wood, and even cracked driveways are a perfect spot for those insects to call home. Ants get in your house through cracks between the walls, basement, or the air between wall panels (if you live in a paneled house).

Detecting Ants in the House

Unlike most other pests, ants can be easily detected. They do not hide from humans and do come out during the day, which makes it easy to spot live insects. A single specimen might not be an indication of an infestation but the regular appearance of more than one ant does indicate a problem. Some species, such as the Pharaoh ant, leave a transparent trail of pheromones on their way. Those trails shine under bright light and smell unusual. Ant nests are harder to spot. They can look as innocent as piles of dirt or detritus on the ground.

1. While ants are not known to carry any diseases, they still spread detritus, unhygienic matter, and allergens on your property.

2. They can also cause huge damage to phone, electricity and computer networks on your premises.

3. At least one mass blackout in the UK has been caused by an out-of-control ant hive near electrical wires. Such incidents can easily start a fire.

4. Though small, their mandibles are powerful enough to sever wires and damage your appliances.

Ants prevention is similar to roach prevention. If you’re wondering why do ants come into the house, tightly seal and store away all food. Ants are even better than cockroaches at accessing hard-to-reach areas. Thus, an open box of oatmeal in the cupboard can result in an infestation. Make sure you sweep all surfaces after cooking and clear up any debris. Block off any access points, especially those at ground level. If you see ant mounds in your garden, slowly pour boiling hot water over them. This will not cause their complete extermination but will keep their population at bay.

A typical British breakfast consists of ham, eggs, and beans. A typical breakfast in Central Asia can consist of fried ants. They are highly nutritious and different species taste differently. For example, the Lemon and gets its name from its savor, while the Sugar and tastes like mint. Recently this tradition has seen some acceptance in Europe. Renowned Chief Rene Redzepi has included them in the menu of his two Michelin star restaurant Noma. Noma was subsequently named the Best Restaurant in the World in 2010, 2011, 2012, and 2014.

Contributions to the Ecosystem

Ants are unwelcome guests to our homes and offices but they are extremely important to the ecosystem. They feed primarily on dead plants, animals, and detritus. This recycles those materials and fertilizes the soil. A study conducted in the 1970s estimated that ants add 1,5cm of topsoil every 250 years. Ants also serve as the primary food source for a vast number of animals. Spiders, reptiles, birds, other insects, and even mammals such as the anteater prey on them. Some animals exist in a symbiosis with ants. For example, the Macrocheles rettenmeyeri lives on the foot of army ants. It serves as an extension to their claws in exchange for feeding on ant blood. A more general example is the relation between ants and fungi. Much like human farmers, many ants cultivate crops of different fungi to serve as a food source.

What to Do in Case of an Ant Infestation

1. If your premises are infested by ants, make sure there is no food source that attracts them.

2. Keep all edibles in sealed containers or inside your fridge.

3. Swipe the floors—not only will this take care of any food particles on the ground but it will destroy the pheromones trails ants leave behind.

4. There is little you can do to exterminate their hives without professional help. Still, DYI products such as killer gel are efficient against small garden ants infestations.