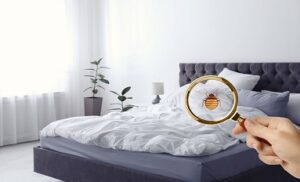 The well-known children’s rhyme about bed bug is quite popular. However, if you’re dealing with a bed bug infestation, the words start to horrify. Bed bug were never truly gone. They have been and are still widespread across various countries in the world. We are observing a resurgence of these pests in many parts of Canada like Toronto, Brampton, Mississauga, North York, and more.

It’s natural to be terrified of small insects that emerge at night and crawl all over your bed. However, there are several myths concerning bed bug. We’ve put up a list of ten facts about these pesky parasites that you probably didn’t know. With the inception of the new year, your local pest exterminator in GTA is here to throw light on a few interesting things homeowners were unaware of: bedbugs.

Specialists report that only 30% of humans exhibit any signs of bedbug bites. The fact that it is frequently misdiagnosed makes detection much more challenging. Many people do not experience an allergic reaction to their bites. As a result, a red rash alone isn’t enough to characterize a problem by bed bug. To make matters even more complicated, bed bug red blotches might be mistaken for scabies or even chickenpox. Find a few common indications of a bedbug infestation here.

The Speed with Which They Reproduce

Bed bug populations can quadruple every 16 days on average. In fact, throughout her three to four-month life span, each female bed bug produces roughly 200 to 250 eggs. Even while bed bug are slower than other pests, it’s still preferable to get rid of them as soon as possible so you can sleep easily again. In other words, if you have 500-bed bug now, you may have 1,000 in less than two weeks. That’s worrisome now.

Bed Bug May Survive Without Food for Up to a Year

Bed bug are the single most difficult insect to eradicate, according to the majority of Best Pest Exterminators. This might be attributed in part to their high rate of reproduction, but it’s very certainly owing to the length of time they can go without a host. Bed bug are supposed to be able to go for up to a year without feeding on blood.

Bed Bug are Known to Emerge Throughout the Day- Not Just Night!

If you think working the night shift and resting during the day would keep your house from a bedbug infestation, think again. Here’s a scary fact: bed bug will change their timetable to come out during the day if you sleep during the day. They’re also not particular about when they eat, and if they become hungry during the day, they’ll look for a food source horrifying during the daytime.

Bed bug are attracted to the carbon dioxide and warmth that humans create, therefore they are especially attracted to multi-unit buildings with high turnovers, such as hotels or rental flats, where they are frequently carried in on baggage or old furniture. Also, they will frequently hide in the voids of our beds’ walls and emerge around 4 a.m., when the typical human is in their deepest REM cycle (sleep) and so breathing the most heavily.

These facts about bedbugs and their infestation can be interesting as well as worrisome at the same time. DIY remedies are frequently ineffective, causing the infestation to worsen and take longer to resolve. Thus, if you want to enjoy a pest free home, then feel free to call Maple Pest Control  on 416-520-8575.