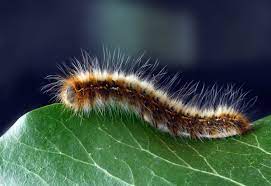 The gypsy moth is a pest that can cause a lot of damage. Their ability to move by connecting with different objects gave them their name. They appear in late July or early August. Males are brown and can fly and breed with different females for almost a week. Females are larger, whitish, and have dark cross marks.

In 1912 the gypsy moth was discovered in British Columbia where a mass of eggs was accidentally imported into young Japanese cedars. The first infection in Canada occurred near the US border in southwest Quebec in 1924, followed by a second infection in New Brunswick in 1936. The insect was destroyed in both events and the credit goes to mass egg disposal campaigns

Gypsy moths are mainly found in GTA and are of concern because their larvae compulsively feed on the leaves of deciduous trees and even some shrubs. A gypsy moth caterpillar can eat an average of one square meter of leaves during the larval stage.

Gypsy moths live in more than 500 different tree species. They can be found on trees with broad leaves, such as white and red oak, poplar, and white birch. The loss of oak trees is affecting forest wildlife, especially deer, which rely on acorns as part of their diet. Acorns provide the necessary nutrients to help the tree withstand extreme cold.

How To Get Rid Of Them?

The gypsy moth spreads easily because its young larvae can be carried by the wind for up to one kilometer. More often than not, you drive vehicles, shelters, and folding chairs to infect new areas. Travelers, especially campers, should be aware of this and double-check their equipment before proceeding.

Keep your tree healthy to make it more resistant to attack. During the dry season in urban areas, water the trees and protect the root zone. Good forest practices in natural areas result in healthier trees that are strong enough to withstand pressures such as defoliation.

Scraping egg masses from surfaces in your garden and removing them by hand is an easy way to get rid of them and control their population. It’s a good idea to wear protective glasses when removing the eggs, as an unclear protective covering on them can irritate the eyes. Later in the summer, tree skirts can be used to control gypsy moth populations. This physically prevents these caterpillars from climbing trees.

The trees are sprayed during a small window in spring to control severe outbreaks of the gypsy moth population. The spray contains a pesticide that targets the digestive system of the early caterpillar. Trees are sprayed separately from the ground or if larger areas of forest are cultivated, from the air by airplane.

Start planning your treatment now to prevent pest damage next spring. After winter, you can start treatment as soon as the conditions of use are favorable, but it is recommended no later than May. Gypsy moth hatching usually occurs between late July and mid-August, depending on the weather, rainfall, and soil temperature. To minimize feeding damage, treatment should be completed as the caterpillar’s increase in size.

Taking proper Gypsy Moth prevention measures now could make the difference with both your trees suffering and dying. To begin the discussion and discover your choices, contact Maple Pest Control or our service provider today.